Beyond the beard, beyond
the hair, the grin, the teeth,
beyond the eyes, if I look
hard enough I can see it,
death made manifest, eyes
sightless as Goethe’s final
plaster face, but that’s a lie,
death has no past, no
future tense, it has no
tense at all – but those
blank eyes are not death
after all, they are nothing,
they ape the shape
but not the life of eyeball
and lid – so when it comes
to that, let there be no
death mask of me. Best,
if I can, die far away from
city strife and rejoin
the earth slowly. If that cannot
be done then burn me fast
and scatter the ashes
at sea or in a lake or on
a mountaintop, or in
the dumpster by the theatre. 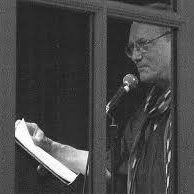 Christopher Hirschmann Brandt is a writer and political activist. He is also a translator, carpenter, furniture designer, and the actor-manager of the experimental theatre company Medicine Show. Poems and essays have been published in journals in Barcelona,Valladolid, Paris, Mexico, New York, and Maine, and in several anthologies. Translations from Spanish have been published by The New Yorker, Seven Stories, UC Berkeley, and the Instituto de Cultura Puertorriqueña.