When I lived in anger, I wished
to be hollow as a basin but still
there was my breath like oil

putting fingerprints on complaints.
I saw the likeness photographed
had me pressed

in a vestibule of cellophane.
A look on my face said No one
will meet you here,

to evaporate.
—oh, I was spun of gloss indeed,
flimsy as a friend—in a train station

the betokened one-of-many
panning with the viewfinder.
It seemed as if nothing would happen,

yet the crowd turned inside-out
like a sleeve from its own crowing.
Trembles on the broth—soon,

the releasable dish
will be released.
Surely, soup is a mutable condition.

Surely, a train chugs forth
and fills the light
and so long

are just the words we made for it.

WHERE I’M COMING FROM

A gauze of ions felt we needed to sleep.
We didn’t listen. We were waiting for the band.
A storm-warden shook his keys,
his hat with numbers. Chances rumbled
all euphoria. For years I said
I was out of here, the bulb of a man.
Or Jeffrey in the Egg, a tardy liquid retired
from a pipe where the road bends.
You wanted reparations?
A portable nest? Well, there’s a traffic light for edges—
a ponytail fellatio bowler,
a brim contortionist, a capsized
mustache. Cannibals strolling
whistle a familiar music
that we’ve been and that we eat.
Your recitation was to rain,
and the band arrived in aprons.

For all the days of which are foggy
are storage compartments, extra letters
on extra sheets of paper.
Sure, spinning out was a speed:
recognition of the slow world, slowly—
the wings dipped with magnets
revealed internal tilt, driftlitter
circling a dizzy spell. That was how they strung together
words—words.
Others honked their horns.
To get out and look
would be to cede one’s vantage.

1.
We say a peeling of green, and mean a sense of it,
a foliate skin as the earth has, wet colt rolling
out of March on leaf-maps of the previous purge.

2.
The hermit, obsessed by his abiding solitude,
forms memorials of the actual with clay: the body
a shill pose its pelt has stretched across it.

3.
Thus the hermit taxidermist and his notion of the previous
are bent upon prevail—the act upon the actual
inciting demigods, shelled planets of the word.

Glass impassively yields to field
where flaxen grasses flicker in the warm agenda.
There is a lunar drag on our shades, a mood-inconsequence
that makes a cradle of our actual size—galar in the circulation of history:

what was pigeon repetition between roofs,
or a gray hand stirring in the picture bin in Omaha
where a darling market lives within the too-big walls of an old factory.

Even in winter
there is the strong scent of pasture
returning on the current. 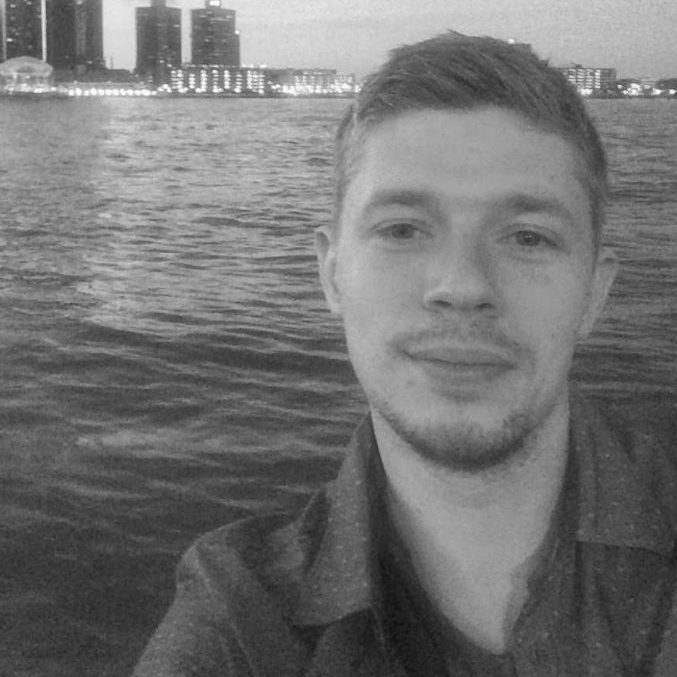 Alec Hershman is the author of The Egg Goes Under(Seven Kitchens Press, 2017). He teaches writing and literature in Michigan, and has received awards from The KHN Center for the Arts, The Jentel Foundation, Playa, and The Virginia Center for the Creative Arts. You can find links to more of his work at alechershmanpoetry.com.