He’s wearing a beret, a lightweight jacket, funny pants, shiny shoes and a satchel, and he’s just
gotten off his bicycle. The bike is a nice one, with hand brakes and gears. He’s doing well to be
riding a bike like this one. It’s better than a bike with a pedal brake and a single gear. But that’s
not why he’s gotten off. He hasn’t reached his destination, which might be school or, better yet,
college, if that’s what they call it here. Actually, it’s called the “sixth form” here. He should
know that; he does know that. Only a foreigner wouldn’t know that, and he is no foreigner. At
least, he doesn’t look like a foreigner, dressed as he is in the fashion of the day. It is a day in
the past, this day, when men wear baggy pants that come down just below the knee, where the
cuffs fluff out into bells. He could be from anywhere around here, but he is probably a native,
because he knows who he’s looking at. He’s looking at the movie star Marlene Dietrich, though
he doesn’t know why. It’s not as if he’s never seen her face before. He has seen it many times,
as has almost everyone in this part of the world. Maybe it is the size of the face that caused him
to stop his bicycle and dismount. The face is about fifty times life size, at least in terms of
surface area. Yet the skin is smooth, the eyes bright, the hair teased, the makeup clearly
delineated. Is this a genuine photo, or is it enhanced? He probably doesn’t want to know. In
fact, he might not even be studying the face. He might have a flat tire and have been forced to
stop here. He might be wheeling his bike past the face on the wall because he can’t ride on a
flat. Yes, he’s on his way to a repair shop, and he happens to be passing Marlene’s face, the
face of a screen goddess, a larger-than-life and better-than-life face. Marlene herself probably
wishes she had a face as perfect as this image of her own face—eyes this bright, hair this
billowy, lips this clearly drawn. Well, she did have this face, if only for a second, when the
picture for this poster or mural was taken. And what of that? Does this young man care to know
how Marlene feels about her face? Probably not; he’s probably just resting up for the remainder
of his journey to the bicycle-repair shop. He’s about to start walking with a hand on the
crossbar, with his pant cuffs flapping above his ankles.

I’m riding a bus to get home. I’m not far from where I live, maybe ten blocks, but the
bus doesn’t go directly there. It runs one long block east and then south along another avenue,
then doubles back to its original route. I look out the window and see large pits in the pavement
where workers are installing pipes. At the edges of the holes, traffic officers are waving orange
flags.
I turn in my seat and see someone I know. She’s a longtime friend. I’d like to talk to her
but don’t have anything to say. I could ask her about her art projects or about her health. She
would probably want to talk about her projects, but might consider her health off limits. There
is some restriction on her earnings so that she can receive insurance benefits; that’s why she
can no longer work with me.
She sees me and says hello, asks me to take part in an event where someone has
dropped out. Everyone in the program is a volunteer. “After the show,” she says, “I’ll have a
party at my apartment. But you’ll have to confirm with me right away.”
“I’ll get back to you within a day,” I say, but somehow I know the show and party
won’t happen.
I rarely take the bus—it’s not efficient. The waiting time is always a mystery. I realize
some stops have a schedule posted, but how can the schedule account for traffic patterns? I
could use an internet application to find out if the schedule has changed, but I have no app. I
have a stupid phone, and it does not accommodate apps. If it does in fact offer these apps, then
I’m the stupid one.
I need the correct bus ticket, not a used ticket, to ride this bus. If my ticket has expired,
the driver might see an error on the collection machine and call me forward.
“Your return receipt is no good,” the driver might say, “because you didn’t wait twenty
minutes before boarding again.”
“I’m coming back from where I was,” I might explain.
“You don’t have a real ticket. Sit down.”
But I won’t sit down. I’ll stand there and keep talking: “You called me here. I’m telling
you what I’m doing.”
The driver might then turn on the bus’s warning lights to summon the nearest police car.
The next person who boards might say to the driver, “Your red lights are flashing. Are you in
trouble?”
What I need are wheels of my own. If not a car, a scooter. If not a scooter, a bicycle.
But not just any bicycle—an electric bicycle. I could go places on an e-bicycle. I could ascend
major bridges with no effort. And when I’m on flat ground or going downhill, I won’t need the
motor, I’ll just coast. Who cares if e-bikes are illegal? The mayor wants them off the streets,
but the police aren’t arresting e-riders. And if they want to stop me, they’ll have to catch me.
In any case, I’m on a bus. Everyone else on the bus has the same idea I have. Maybe
they are far from where they want to go, or maybe they are close to home. We all know the bus
will let us off at our destination, or at least closer to it than we were when we got on. That
knowledge is enough for me. 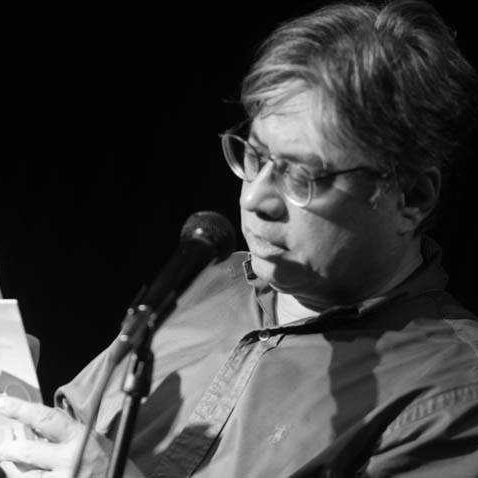 Thaddeus Rutkowski is the author of six books, most recently Border Crossings, a poetry collection. His novel Haywire won the Asian American Writers Workshop’s members’ choice award, and his book Guess and Check won the Electronic Literature bronze award for multicultural fiction. He received a fiction writing fellowship from the New York Foundation for the Arts.